Shoes come and go but some become iconic, especially when you associate summer, art and a great artist with them. Like Salvatore Dali, the first who influenced the High Society to wear the traditional Spanish summer shoe.

La Manual Alpargatera in Barcelona was the first manufacture who produced them even way long before. Since most fashion houses are copying the original espadrille we had a chat with the original, Mr Joan Carles Tasies, who’s family tradition goes way back before Signor Dali picked this shoe and had worn it all year round.

IRMA: What is the history of the Espadrille?
JOAN CARLES TASIES: Although many people claim their places were the origin of espadrilles, no one can truly be sure. Espadrilles have been used around the globe for tens of thousands of years, and since we’re talking about a completely biodegradable product, how can anyone be sure where the first were made? Impossible! What we can say is that “fashion espadrilles”, (that is, espadrilles made with a modern concept of fashion, with heels, wedges, were first made in Barcelona, at La Manual Alpargatera, in 1940, when their founders decided to bring espadrilles to the fashion world from the “lower” stage where they had been for millennia, used only for work or matching traditional costumes.
With “La Manual” they got their first upgrade to the fashion world. Before that, during tens of thousands of years, espadrilles have been utility shoes, with no changes in their concept, around the whole world… Our police, in their “holiday dress”, use espadrilles – made by La Manual Alpargatera, by the way – just as an example of how espadrilles are tide with our culture)

RMA: Which one of your styles is the “all-time best seller”?
JOAN CARLES TASIES: Our Pinxo (the traditional Pinxo aka “Vigatana” in all its variations can very well be the best sold.

IRMA: What are the difficult parts of creating an Espadrille?
JOAN CARLES TASIES: Undoubtedly, handcrafted parts made by expert and experienced hands with uneven materials. Even the availability of raw materials is sometimes an issue. That’s, for instance, what made spurred the change of the espadrille soles from hemp to jute, among other changes in order to adapt to the changes of times. 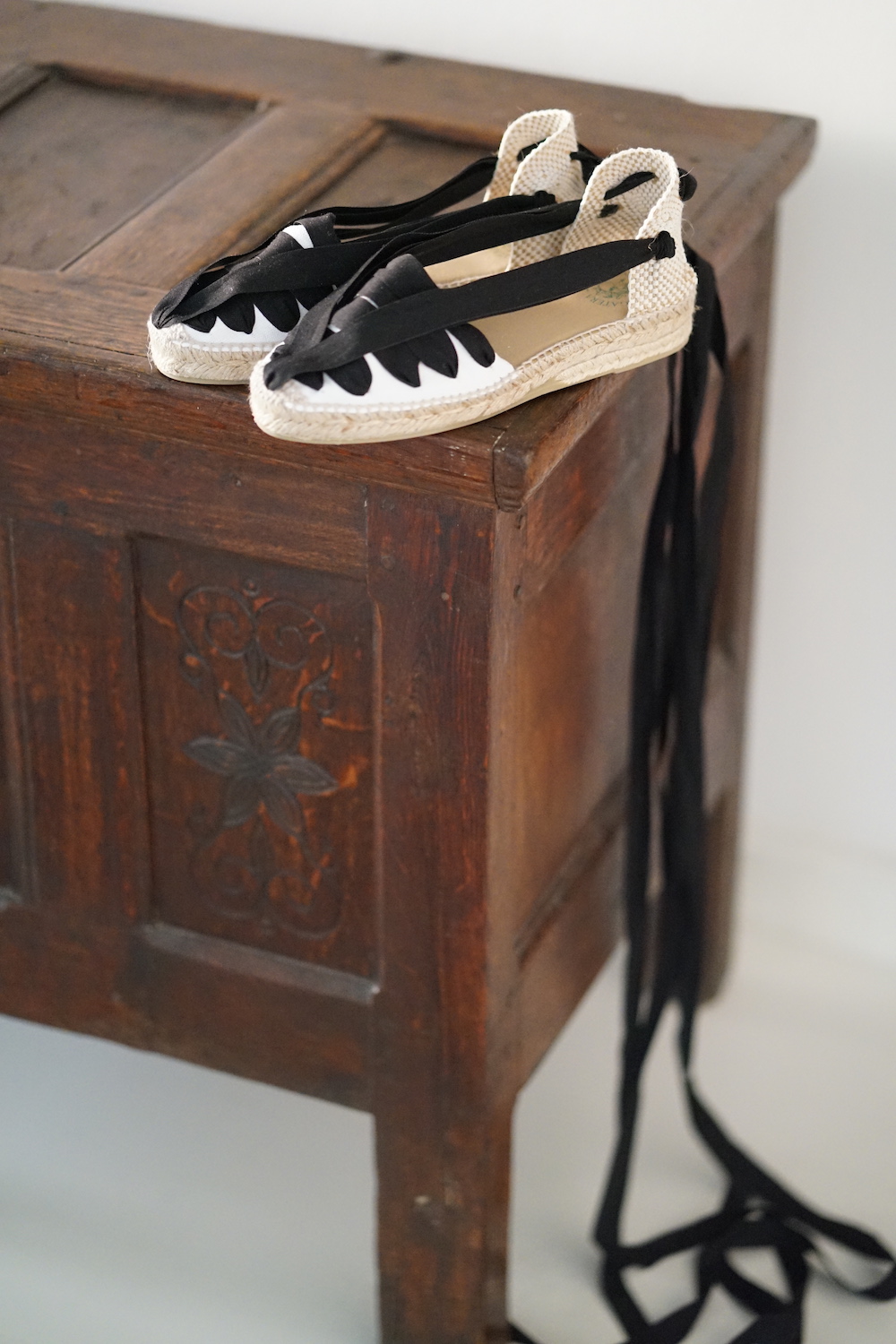 IRMA: How do you take care of your espadrilles?
JOAN CARLES TASIES: I try to change them often, so they can breathe and “have a rest”. Keep them as dry as possible.

IRMA: Why do you think most fashion houses like Saint Laurent, Chanel, etc. are creating espadrilles at the moment?
JOAN CARLES TASIES: Espadrilles are trending now. It looks like every major fashion brand must have at least one model of espadrille in their collection. That means that some of them may be designed without the expertise and know-how those brands have in their natural fields, but also bring to the espadrilles field interesting contributions, even if not all of them succeed in understanding what an espadrille is. A shoe that looks like an espadrille is not necessarily an espadrille.

IRMA: The espadrille symbolizes a summer mood, artistic spirit and bohemian style, what influences you to create new versions, if so?
JOAN CARLES TASIES: We have various and eclectic influences, like our city. We accept new things, not due to their novelty, but due to their benefits, their contributions, wherever they come from, as far as they let us to keep our roots and values, to be authentic. We try to embrace inspiration no matter where it comes from.

IRMA: When you design a new espadrille which persona, which images do you have on your mind?
JOAN CARLES TASIES: We think in Barcelona as a person, so to say, someone with our city’s personality, who likes to enjoy life, likes comfort, enjoying simple things as well as more complicated pleasures, who enjoys art, fashion, parties, music, walking, but not stress, rigidity or imposition, who likes to be free and accept new things to combine and enjoy, while keeping it’s personality, and that’s the “persona” we have in mind. Someone like us.
Humans Making Espadrilles for Humans Enjoying Espadrilles. Made in BCN, BCN style.