We caught up with CNN’s Chief International Correspondent Clarissa Ward at a dinner hosted by “Women for Women” in Munich. It was not long after she returned from reporting inside Taliban controlled territory in Afghanistan. She is one of the only western journalists to access Taliban territory to see what life is like under their control. She interviewed both civilians and Taliban officials and is on the Global Dispatches podcast to discuss her reporting. Jasmin Khezri from Irmasworld talked to her about her experiences in war zones and how having a family of her own changed her.

IRMA: What was the most fascinating assignment of your career?
CLARISSA WARD: “There have been many but the most fascinating recent assignment was spending two days with the Taliban in northern Afghanistan. This is a world that has essentially been shut off to the outside world, and especially the Western world, for decades. To have the opportunity to talk to Taliban commanders and the people living in areas under their control was illuminating and exciting.”

IRMA: Being a woman you have taken enormous risks even far from secure, how do you cope with fear and so many deaths of your colleagues?
CLARISSA WARD: “The best way to cope with fear is to avoid situations where you feel really fearful. Usually, if you are very afraid, it means you are in significant danger and I work very hard to plan my trips to make them as safe and as sensible as possible. That said, of course, when you are in a conflict zone, all sorts of things can go wrong and you often are exposed to risk. I try very hard to stay calm and clear headed by breathing deeply and I often repeat a mantra to stay focused and cool.

Dealing with the death of colleagues is horrendous and there is no good way to soften the pain and sadness and anger that comes with that kind of a loss. You have to sit with it and acknowledge it and find a good therapist.”

IRMA: What seems to be the most difficult impact in people you are communicating with in conflict zones?
CLARISSA WARD: “The thing I see civilians struggling with most in war zones is how to take care of their families. It is the most basic and fundamental instinct, and to be put in a position where you can’t protect your child, where you can’t feed them or educate them or offer them some kind of a future – it is pure agony.”

IRMA: Can you tell us your lately impression during your Iran visit, what kind of effect US sanctions are having on the nation?
CLARISSA WARD: “The US sanctions on Iran are having a biting effect. People had briefly glimpsed a better future and now that is once again gone. Businesses have shut down, opportunities for growth have disappeared. Iran is not a place where you see people starving on the streets, it does not have that kind of poverty. But there is a fog of disillusionment and depression hanging over the place- as if it is being crushed under the weight of its own untapped potential.”

IRMA: Now you are raising a family. You say you are grateful to surf this beautiful wave. How can you combine the harmony of your family with your usual posts which seem to be mostly very dangerous?
CLARISSA WARD: “I now avoid assignments which feel too dangerous or reckless. My family is my priority and I am conscious of my responsibility as a mother. At the same time, I recognize that I cannot be a great mother if I don’t continue to have a vibrant career and I thrive off of the work that I do. It is about finding the right balance and I can’t pretend I have mastered that yet. It’s a constant struggle but you keep your intentions in the right place and keep trying and you make it work.”

IRMA: If you could change ONE thing in this world, what would it be, and why?
CLARISSA WARD: “There are so many things I would want to change! But my first goal would be to stop people from dehumanizing others who are different to them. It’s the first step on a slippery slope towards acts of violence and it is often borne out of ignorance and arrogance- two characteristics that I deplore.”

IRMA: What is the biggest injustice against women happening on this planet right now? What can I do to help?
CLARISSA WARD: “The fact that rape is still a commonly used weapon of war is something that horrifies me. So few women have the opportunity to really deal with the trauma of being raped and I am big supporter of organizations that educate societies about rape and support women who have lived through that hell. The work of Doctor Denis Mukwege in the Democratic Republic of Congo is an inspiration. Women for Women International is one of my favorite charities, doing incredible work to empower women who have been subjected to grotesque sexual violence.”

IRMA: What is your philosophy/ mantra in living a fulfilled and balanced life.
CLARISSA WARD: “For me personally, it is essential to have some kind of spiritual path that allows you to keep the world in perspective, that gives you the tools to stay mindful and in the moment and which can offer you fleeting glimpses of the divine. Humility and self-awareness go a long way in giving you the grounding you need to have a full and balanced life.” 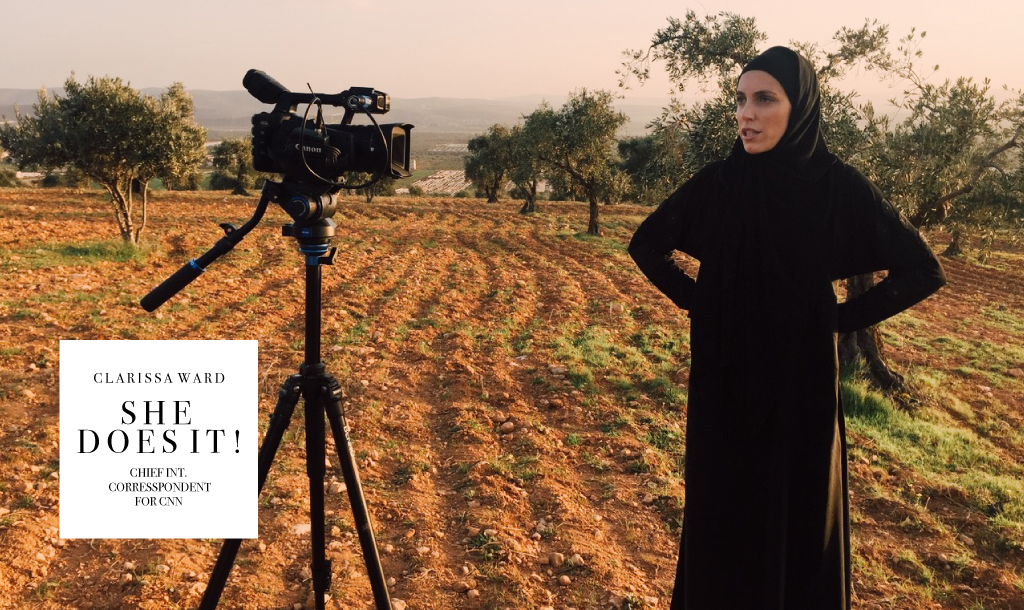