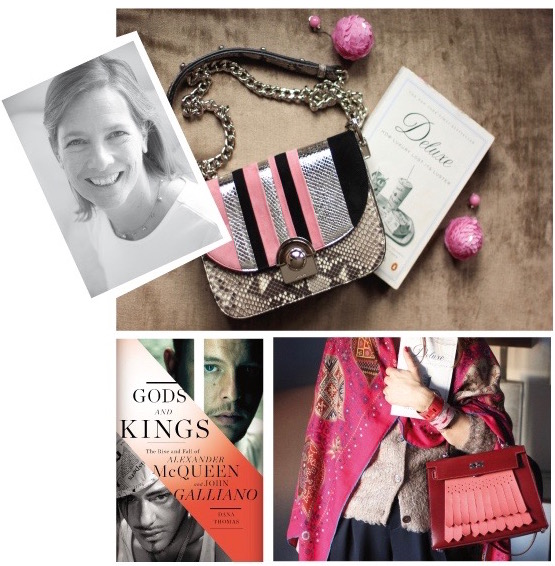 If you are interested in the real world of luxury fashion and the secrets behind it, you have certainly heard of journalist and writer Dana Thomas.  She is the author of the amazing double-biography “Gods and Kings: The Rise and Fall of Alexander McQueen and John Galliano” and the New York Times bestseller “Deluxe – How luxury lost its luster”. Her expertise and deep knowledge of the luxury industry and its players is unparalleled. Both books totally grabbed my attention and I had to finish them in one go. But after reading the books I had a few more questions and I consider myself very lucky that Ms. Thomas was so kind to answer them.

IRMA: In your first book, “Deluxe – How luxury lost its luster”, you describe the development of originally family-owned workshops and ateliers into public listed multi-billion dollar marketing & sales machines. What changed since 2007 with the impact of the financial crisis, SARS etc.?
Dana Thomas: The companies, thanks to the Chinese market, have grown exponentially. Back when Deluxe came out, Louis Vuitton was believed to do about $3 billion in sales; now it’s $10 billion. Gucci was doing $2 billion; now it’s closer to $5 billion. The luxury industry’s sales have increased by 50 percent, from $200 billion to $300 billion. Along the way, the brands opened hundreds of stores, launched countless lines, and raised prices dramatically—far more than the economy’s growth. Honestly, I don’t know how people can still afford to buy these products. (I can’t). But they do, a lot.

IRMA: Handbags, perfume, … Which categories drive sales today, and where is the journey going?
Dana Thomas: Accessories, make-up and perfume still drive the business. The profit margin is enormous—for some brands, handbags retail for 20 times their cost now—and they are easy to sell to the mass consumer. Though the Chinese market is stalling, it still makes up for the majority of sales. And logo items are still status symbols in China, so that’s what sells—and makes companies money.

IRMA: How would you describe the position and importance of fast fashion companies (ZARA, H&M) in today’s market?
Dana Thomas: Fast fashion has put pressure on luxury companies to compete on a swifter schedule, and to always have new products available in stores. But now that sustainability is becoming important to fashion consumers, I suspect fashion’s dominance will diminish. It will always corner the teen market—because teens grow and burn through clothes—but it will be harder to hold on to customers over 20 who have disposable income and care about the environment. Those consumers will not buy throwaway clothes.

IRMA: How does the concept of total vertical integration within a luxury company agree with third party e-commerce platforms like Net-a-Porter or Yoox? Do independent e-commerce sites have a future?
Dana Thomas: I do think independent online retailers like Net-a-Porter and Amazon (which is moving into fashion) will continue to thrive, because they reach markets that are underserved by brick and mortar stores and because there is now a whole generation that loves shopping online. Luxury brands were far too late to the online retail game, and once they did figure out that they needed to be a part of it, they entered it so cautiously that consumers never latched on. The segment that is now struggling the most is department stores—their model seems to be passé and I expect that several major chains will fold in the next few years.

IRMA: Every brand within a luxury group sells more or less the same range of goods (bags, sunglasses, perfume, watches) and the main shopping areas look the same all over the world. Don’t people get tired of “luxury”?
Dana Thomas: Yes, consumers are definitely suffering from “luxury fatigue,” and brand’s sales figures are proving this. Several major brands’ sales have dropped significantly and some are touting “turn-arounds,” like Gucci and Coach. The business model is tired and predictable.

IRMA: Designers are coming up more and more with special prints, embroideries and extravagant techniques to set their collection more and more apart from the high street stores?
Dana Thomas: I think that has always existed.

IRMA: Will prêt-à-porter be the new haute couture? And if yes, what will happen to haute couture?
Dana Thomas: I don’t think so, because haute couture is made-to-measure and offers a sort of attentive service one would never ever get in a ready-to-wear boutique, no matter how posh it is. But the idea that haute couture disappears is surely possible. So few customers can afford it monetarily or time-wise. What sort of modern woman can do three fittings for each outfit anymore?

IRMA: Personally, how do you define luxury?
Dana Thomas: As something special and unique, made with integrity and sold with love.