After the war a piece of art was created and for many years the stage of the golden age at the Côte d’Azur when Madame Francine Weisweiller hosted Yves Saint Laurent, Gianni & Marella Agnelli and Picasso among many other flamboyant guests at her Villa Santo Sospir in Saint-Jean-Cap-Ferrat. But the most important guest of the glamourous socialite by far was Jean Cocteau.

This summer we visited this well assembled one of a kind venue which has recently been acquired by the Russian entrepreneur Ilia Melia with the passion for one special task: To restore and rebuilt this jewel to its former glory.

We had the opportunity to ask Mr. Melia a few questions:

IRMA: Was it your initial idea to buy the Villa Santo Sospir and to open it to the public?
ILIA MELIA: The Villa has always been open for public, it is important for us to preserve traditions.

IRMA: Do you see this project as a piece of art or an investment?
ILIA MELIA: For us, this is definitely not an object of real estate, it’s an art.

IRMA: What does the Côte d’Azur and this period when some of the most influential artists were living there mid-century means to you ?
ILIA MELIA: The Côte d’Azur influenced artists always more than they did on it. For example, the drawings of Cocteau and Picasso in the south became very southern, certainly under the influence of the region.

IRMA: How many wall drawings and art work are there in total by Jean Cocteau?
ILIA MELIA: I cannot say the exact amount of Cocteau’s art works. We have just started to create a collection of Cocteau ceramics and paintings in addition to those that we have on in the house. So far, we have 10 new pieces, all are unique and soon there will be more.

IRMA: Which other designer furniture pieces, ceramics, textile designs, tiles and art are also at Villa Sospir worth mentioning?
ILIA MELIA: We will preserve and carefully restore all the pieces of the Madeleine Castaing and Cocteau époque.

Did you leave the frescos as there were or did you have them restored?
We make a high-quality restoration of all frescos; all efforts are aimed at preserving the paints. To do this, we invited the best restaurateur, Florance Kremer.

How and who is your team of specialists which worked on that project?
We are launching a project to create furniture together with young designers from Brazil. Textiles of course have to be replaced. With Jacques Grange we will create unique fabrics of Santo Sospir, in the style of Madeleine Castaing.

My friend Jacques Grange, is the stylistically project manager, Madison Cox makes the garden project, the Laurent Fachard is engaged in creating light, Antoine Bruguerolle, the architect of cultural heritage leads the project as an architect.

Is there a contemporary witness from whom you could get information about how life was lived, and art was produced at Villa Sospir?
Our cultural attaché Eric Marteau lived in the villa for 25 years, he cherishes the villa and its history. He is a fountain of knowledge. He loves the work of Cocteau and the villa, and the people who come to the villa like Eric and this love is mutual.

You can certainly feel the history of the golden times of the Côte d’Azur when you visit the house, what makes this place so special?
Villa Santo Sospir – this place is completely different, not like the other villas of Belle Epoque, Villa Leopolda, Domaine des Cèdres. Here is another atmosphere, magical, cozy, not pumping, and this is what attracted people who came to the villa. Coco Chanel, Christian Dior, Herbert von Karajan, Yves Saint Laurent, etc.

How about the garden, will you replant it by a landscape designer or will it be restored historically?
The garden is a separate story. We do not change the master plan. We do not change the style of the exotic garden, but with Madison Cox we made a wonderful project. I do not want to disclose all the details. It will be a surprise and an excuse for another meeting with you.

Which books, films, music did inspire you when you started this project?
On the contrary. This villa inspired us to make a book and a film about it.

The new book of Santo Sospir, along with Medison Cox and Jaques Grange will be unique. We collect the archive and it will become the basis of this book. The main task of this book is certainly not information, but a visual picture. Photos of villas and drawings of young artists who created them under the influence of the villa. 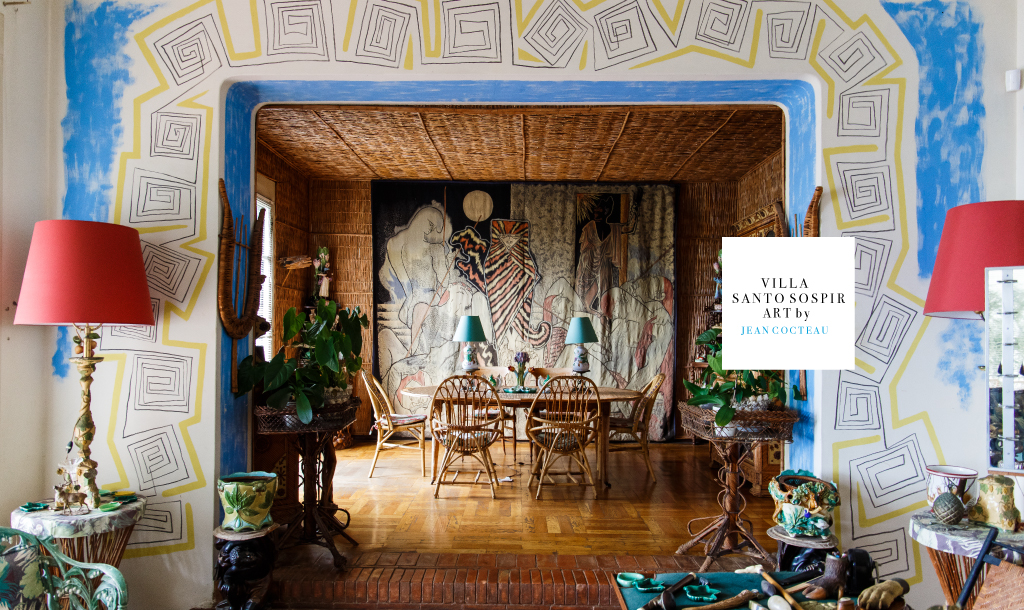