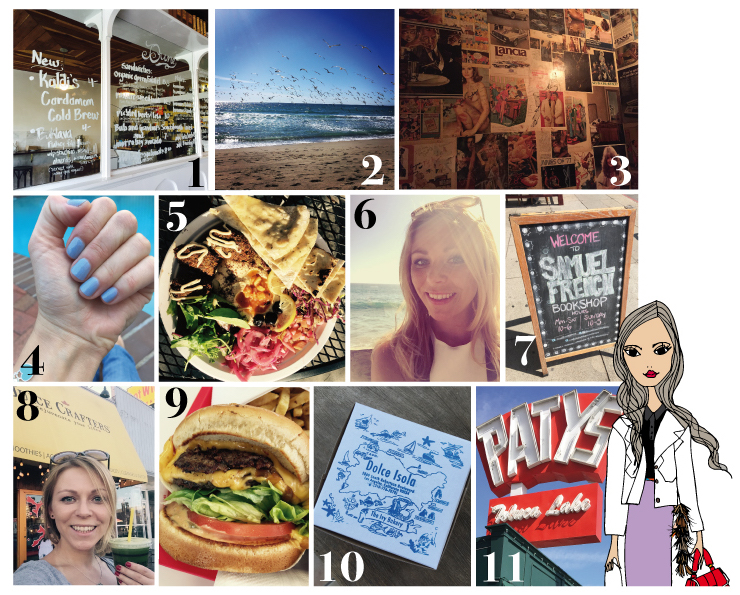 And the Oscar goes to… All eyes are on Los Angeles today, and we asked Anna Ewelina, a German actress trying her luck in L.A., for her tips on where to go in the City of Angels.

1 & 5. Dune is where you find the best homemade falafel & hummus plate in town! Dreaming about being in the Middle East was never easier!
Dune, 3143 Glendale Blvd., Los Angeles

2. I love to go for walks at Malibu Beach, especially in the morning when the sky is still clear and crisp in LA.

3. To get to Good Times you have to enter through a refrigerator door – no joke! You’ll find yourself in the world of the 70s, with tasty cocktails and 70s music and furniture. A must-see!
Good Times at Davey Wayne’s, 1611 N El Centro Ave, Los Angeles

4. There are plenty of mani-pedi places in LA. My favorite one is TK Nails (4). A very simple place, but they offer a large choice of OPI and Essie nail polish. Definitely ask for Linda, she’s amazing!
TK Nails, 4795 Vineland Ave, North Hollywood

5. Enjoy delicious food and tasty drinks with a beautiful view! You might even see dolphins! This place is like heaven on earth.
Moonshadows, 20356 Pacific Coast Hwy, Malibu

6. It’s great to live by the ocean, feeling the wind and sun on my face.

7. I’ve never ever felt like I could buy every single book in a bookstore. I only feel like that at Samuel French’s Bookshop! Tons of great books, especially for artists!
Samuel French Bookshop, 7623 Sunset Blvd, Hollywood

8. I love to start the day with something healthy that also tastes good – like wheat grass or ginger shots.
Juice Crafters, 14550 Ventura Blvd, Sherman Oaks

9. Yes, I know. Fast food isn’t healthy. But I love it from time to time. And this one is probably the freshest, healthiest and most delicious one! Try In-n-out’s Double-Double!
In-n-out, 13425 Washington Blvd, Marina del Rey

10. This place reminds me of Italy: delicious food, tons of flowers, a wonderful patio. And at the end you get some delicious cookies from their in-house bakery.
The Ivy in Beverly Hills, 113 N Robertson Blvd, Los Angeles

11. My favorite breakfast place is Paty’s. A typical American diner, close to the studios. You might spot a celebrity!
Paty’s, 10001 Riverside Dr, Toluca Lake

Sometimes I feel like I have had enough of all the fancy and famous people in Hollywood. Then it’s time for the roof top bar at the Ace Hotel, Downtown. No fancy people, but a nice location which once used to be a church. Don’t forget to bring your bikini!
Ace Hotel, 929 S Broadway, Los Angeles

Anna was born in Danzig, Poland, and came to Germany as a kid. Foreign languages and cultures interested her from an early age on, as did slipping into different roles. She took part in numerous theatre productions and studied acting in Frankfurt. After a range of short movies Anna Ewelina made her TV debut in the German TV series “Unter Uns” in 2006. You may have seen her in the German TV series “Unter Uns”, “Tatort“ and „Polizeiruf 110“. In 2012 Anna produced her own short movie “Würde” and played the leading role. She won the 99 Fire Film Award for Best Movie at the International Film Festival Berlinale. Today Anna is going back and forth between Munich, Warsaw and L.A. with her cute black pug Resi.

Our guest editor Zoe met Anna when they were both waiting in line at New York Fashion Week and it was freezing cold outside. The one thing that warmed my heart, says Zoe, was hearing someone talking in German behind me. I turned around and saw this beauty smiling at me. We started to chat and felt connected, talking about NYC, LA and following your bliss. Anna impressed me, because of her open soul and kind attitude. Compared to all the young actresses that try too hard to make it, she really seems to enjoy the journey and whatever life might throw at her. It was a good reason to meet her in LA and have her show me around in her new world.

Letting go of somebody you truly love is like burning a picture or closing a door? and why?
It’s like closing a door. Because there’s still a chance it might open again… someday.

What is the hardest part about being an actress?
Definitely to exercise patience!

What is your nickname?
I have lots of them: Ann, Ania, Anusia, Aneczka. Most of them are Polish. Polish people love nicknames!

Does the idea of becoming famous scare you?
Not at all. I try to avoid fear in my life. It stops us from moving forward.

What is your favorite pair of shoes?
At the moment KANAAS handcrafted espadrille-inspired slip-ons. I love them!

Does LA hug you like NYC, or do you have to conquer it like Shanghai?
It’s a mix of both. I met so many interesting people here! Fortunately most of them gave me a hug!