LONDON: It seems that rings are no longer in the usual place of the according finger but rather they are outstandingly positioned with the most individual significance. Why else should one wear a ring? A ring gives us a message, or maybe it is just for the purpose of beauty.

Rings are big and mighty this upcoming season and they make a statement. Instead of carrying a handbag or clutch you can wear a combination of decorative or fine jewellery rings. They are sparkling, colourful and so unique that you have to look twice to realize how beautiful they are.

So let me introduce you to some very meaningful ones that you will surely notice soon.

CAMEO (CARVING) RING: The modern cameo ring usually shows the profile of a goddess or a Roman soldier. It is a plain hoop mounted by a table setting, into which a carved cameo is affixed.

CHAMPIONSHIP RING, SPORTS RING: The best known of these are the Super Bowl rings, a ring presented to members of winning teams in professional sports leagues as well as college tournaments in the US, often worn by college kids.

COCKTAIL RING: As the name suggests, it almost looks like an exotic cocktail with a large, colourful stone set in the middle, usually surrounded by tiny diamonds.

ENGAGEMENT RING: A ring given to and worn by a woman signifying her engagement to be married, usually it holds a solitaire diamond.

ETERNITY RING: A ring symbolizing eternity with a partner is often given instead of an engagement ring. UK Prime Minister Gordon Brown purchased one for his wife (as a recompense for not having originally proposed to her with an engagement ring).

FINGER ARMOR RING: A ring style which spans from the base of the finger to just below the fingernail or middle of the second joint. This type of ring must have bending joints and Karl Lagerfeld hides his hands with these kind of jewels when he is not wearing gloves. 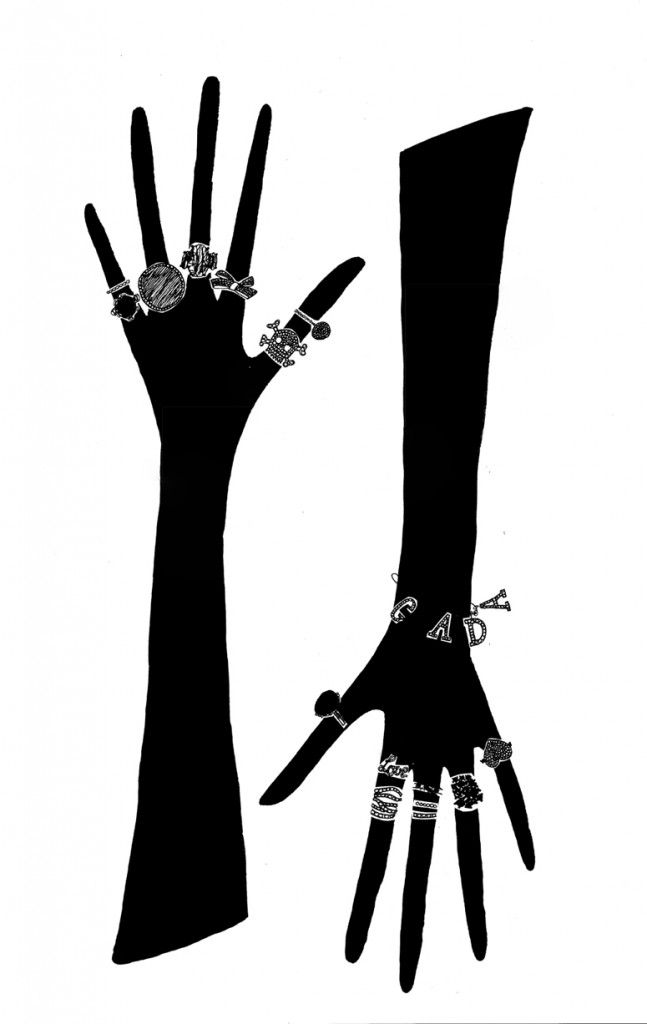