Remember the time when Art was first mixed with Fashion and your first stop in London was the Paul Smith Shop on Westbourne Grove?

He was one of the first fashion designers to not only present his merchandise artistically in the shops, but also used his Shop as a platform for artworks and other objects by including gallery walls and showcasing them throughout the premises. These days, you may even order pieces of art over the Paul Smith website, besides his latest collection of course.

We talked with the British fashion designer about collecting art, doing the things you love, the artists he admires and being afraid of failure.

IRMA: You were one of the first designers who assembled his art collection, illustrations and books into your shops. What made you do that?
Paul Smith: It stretches back to my very, very first shop in Nottingham, England, which was a tiny basement space, just three metres by three metres with no windows. When you visited as a customer, you were immediately in a very confined space and it was pretty intimidating. Back then selling lots of different things was just something I did to make people feel at ease when they walked in. It would be just me with my Afghan hound, Homer, working there and by having lots of different books and objects available, it meant I could pick up something and start a conversation with people: “I was in France and picked up these posters” or “These pen-knives are designed by a guy in London” and so on. It’s evolved from there and without really knowing it I became a pioneer of that whole idea of art and objects being sold alongside clothes.

IRMA: Some people say artists are the last people who are allowed to speak the truth. How does that statement make you feel?
Paul Smith: There is a permanence to a piece of music or a painting or a film which means that if you’re making a strong statement it will remain in the public view beyond the moment it was originally made. Within fashion this means you design something at a particular moment in time and people often look back and judge its relevance or meaning without understanding the original context. The main thing is to acknowledge that art isn’t objective; it’s always going to divide opinion. That’s one of the best things about it.

IRMA: Which fashion accessory do you associate with the following art eras, and why?
Paul Smith: Baroque – Baroque to me is Hells Angels. Baroque was very much about a statement and letting people know you’re there. A thick black leather jacket with heavy embellishments. Lots of pin-badges, studs and embroidered patches.

Cubism – Cubism brings to mind very simple lines. Although Mondrian was by no means a cubist, Yves Saint Laurent’s Mondrian collection is something I associate with the idea of cubism, the vertical and horizontal lines forming geometric shapes and so on.

Belle Epoque – The Belle Epoque is certainly something you wouldn’t use to describe Paul Smith. Very decorative, attention-seeking clothes for special occasions like a very ornate couture ball gown.

Postmodernism – Thinking of architecture rather than art, postmodernism brings to mind some of the older designers like Claude Montana or Thierry Mugler. Their very strong shoulders and aggressive tailoring remind me of the amazing lines of Corbusier and Mies Van der Rohe.

IRMA: Why should someone collect art today?
Paul Smith: I don’t think anyone “should” do anything in particular, apart from having good manners and behaving properly. With art collecting, the main thing for me personally is that it should be about something you love and that brings you joy, rather than collecting for value or status. In my own collection I have things that are very low-cost alongside things that are very collectible and expensive. I can get just as much joy out of a drawing from an 8-year-old fan that’s in my collection, as I do from the Giacometti drawing that’s alongside it.

IRMA: What is the first thing that makes you buy a piece of art? Are you obsessed more with colour or form?
Paul Smith: I think people would describe my taste as ‘eclectic’! It’s always an instinct but you never know where it’s come from. People often ask me who my favourite artist is, but I find choosing favourites impossible as it depends on your mood and so on. I’ve always loved the work of Alberto Giacometti and am lucky enough to own a couple of original drawings by him. But then Matisse is someone else I’m a big fan of, particularly his amazing use of colour. Actually my first ever shop was exactly the same size as his ‘Snail’ collage, so you can often see a print of the Snail in my art walls.

IRMA: What would you tell someone who is afraid to fail?
Paul Smith: Sometimes the most wonderful things can come from failure. Growing up, I had dreams of becoming a professional cyclist but unfortunately had a serious crash. It was an accident that I couldn’t avoid but as a result I’ve entered the world of design and out of bad came good! 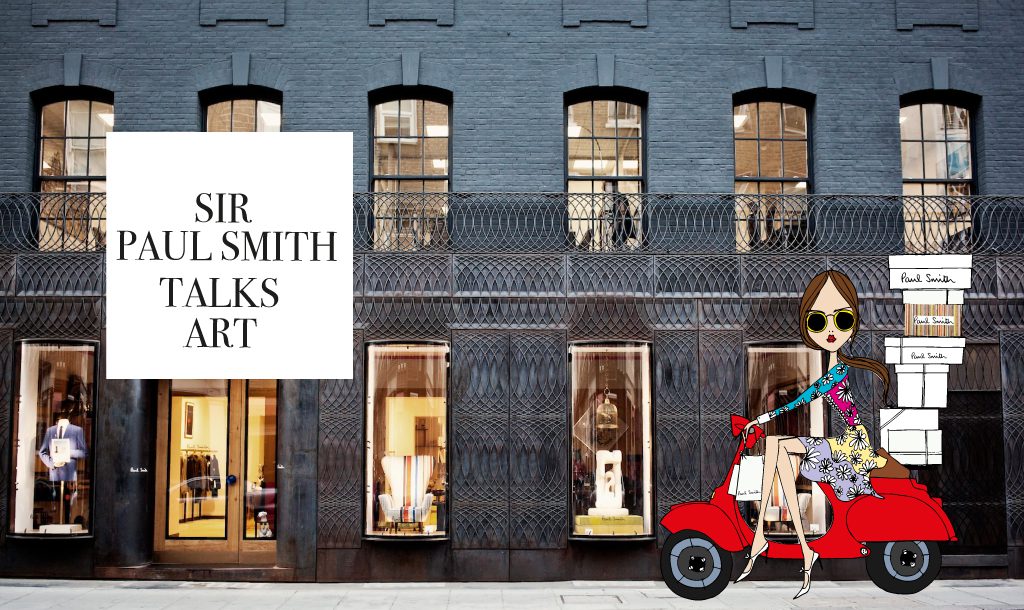