It’s one of Spain’s most iconic and beloved dishes, the paella. I love this classic rice dish because it is so versatile and can be cooked differently every time, depending on what you are in the mood for (and the contents of your fridge). A few fun facts about Paella, the perfect summer dish.

1. A Valencian tradition
Visitors often see paella as Spain’s national dish, while most Spaniards consider it a regional Valencian dish, which is where it originated. The original recipe combined home-grown vegetables, usually green and broad beans, with pieces of rabbit and the short grain rice that is mass-produced around the City of Valencia thanks to the sophisticated irrigation system introduced by the Moors. It was traditionally a dish of poor peasant people, because it was cheap and filling, traditionally cooked outdoors and eaten right from the pan, or paella – hence the name. Valencians use the word paella for all pans, including the specialized shallow pan used for cooking paellas.

2. One dish – a million recipes
As Valencian chef Llorenç Millo has observed, “paella has as many recipes as there are villages, and nearly as many as there are cooks.” In addition to the classic Valencian paella, there are two more widely known types: seafood paella and mixed paella. Valencian paella also consists of white rice, green beans, white beans, meat (chicken and rabbit) and snails. Seafood paella replaces meat and snails with seafood and omits beans and green vegetables. Mixed paella is a free-style combination of meat, seafood, vegetables and sometimes beans. Other key ingredients include saffron and a good amount of olive oil.

3. Let the rice take center stage
Paella is above all a rice dish, so it is ultimately good rice that makes a good paella. You will need a short-grain variety that absorbs liquid easily and won’t dry out, preferably Spanish bomba rice (often sold under the geographic indication Calasparra). You can also use Japanese sushi or Italian risotto rice. Unlike with a risotto, though, stirring is absolutely forbidden! It’s important not to stir to ensure the delicious, toasty golden crust, known as socarrat, can form on the base. Also, do not overload the pan with too many ingredients, thereby suffocating the rice. When the rice in a paella is cooked well, nothing else matters.

4. A few more cooking tips
If you don’t have a paella pan, use a medium-weight, non-stick frying pan. It should be shallow and wide to allow moisture to evaporate quickly, and the base shouldn’t be too thick, otherwise the pan will retain too much heat and the food may overcook. You may have to move and rotate the pan to distribute the heat. Sauté tomato, onion, and garlic until they are soft for the sofrito, which provides the flavor base of the paella. You may also add fresh herbs or a dried red pepper for more flavour.

5. The best paella restaurant
And if you don’t want to cook it yourself, where do you eat the best paella? In Valencia, a lunchtime paella at La Pepica is a must. Don’t be fooled by the looks of this casual beach restaurant. The Spanish cuisine, especially their famous paella, are delicious. At one time, Ernest Hemingway and painter Joaquin Sorolla were regulars, and even King Juan Carlos likes to eat here. The restaurant faces Playa de la Malvarrosa and has a great terrace, but if you enter from the town side, you can walk right through the kitchen.
Paseo Neptuno, 6, 46011 Valencia, www.lapepica.com 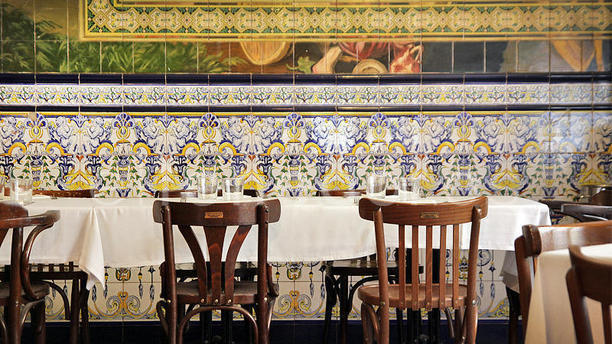 Another great place for excellent paella is La Malquerida (pictured above), a classic Valencian taberna which has been serving good vino tinto and paella since the 1940s. The dining room is cosy with beautiful hand-painted tiling and dark wooden furniture. It doesn’t get more authentic than this.
Carrer de Polo y Peyrolón, 53, 46021 Valencia, www.lamalquerida.com