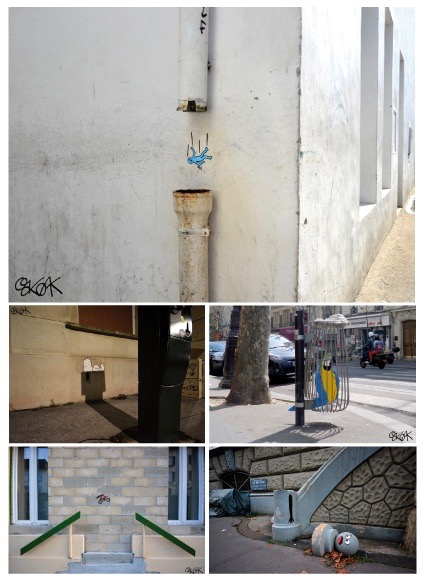 These days, the most exciting art is often not to be found on the walls of museums and galleries, but out in the streets. What was formerly frowned upon as graffiti, it gaining recognition as street art and artists like Banksy are becoming household names. French street artist OakOak brings his unique tongue-in-cheek art style to the walls and streets, turning mundane structures into artworks by adding his cleverly placed drawings. Comic figures, superheroes and other pop culture references bring not only flashes of color to mostly crumbling buildings other urban structures, but smiles to the faces of passersby. Our guest editor Zoe Warncke spoke to the elusive street artist who cleverly plays with the imperfections in the streets for his whimsical art.

What comes first, the venue or the ideas?
OAKOAK: I walk a lot every day and I look everywhere – on the walls, on the ground, and sometimes a specific urban element or detail gives me an idea. Afterwards I can prepare it and I will come back to draw it.

How do you communicate your stories/projects?
OAKOAK: I use social media, it allows people who don’t live in my city to see my works. It’s still incredible for me when I receive messages from people who live in the USA, in Thailand or some other faraway place to say that they like my work. The internet makes it possible to meet so many people, and often afterwards in real life.

How do you research, where do you find ideas?
OAKOAK: I don’t really know. As I told you I walk a lot everywhere, in each city or country where I am. And after that the inspiration comes, or not. I have some inspirations such as Calvin and Hobbes, or the humour of the Simpsons, or old video games. All that inspires me and gives my own creations.

If you were a crayon, what color would you be?
OAKOAK: I would be green. Or grey because I really like to draw with a pencil.

What would you change about the way your parents raised you?
OAKOAK: When I was a teenager I could have answered you so many things… But now in retrospect I can say nothing because they were very good and I was really lucky with them.