CANNES: What an appearance! Top model Miranda Kerr cut a sensational figure in an outfit fit for a black tie event as she rocked the press conference for the new Magnum Pink & Black ice cream on Thursday afternoon. She looked simply stunning in her black long evening gown with embroidered black pearls. Wow! The Croisette was blocked with fans who were keen on throwing a glance at her. Her reason for being at the world’s most famous film festival was a cool one: She celebrated the new Magnum ice bar campaign „Pink & Black“ here – as Cannes is in these days indeed the capital of indulgence, elegance and lust for life.

So, Miranda, how are you enjoying Cannes?

MIRANDA KERR: It’s so beautiful to be here on this gorgeous day and in such a playful way!

MK: Thank you. And why not? It’s Cannes, right?

What does it mean to you to be here for the launch of Magnum Pink & Black?

MK: It’s important to have indulgence in life and everything in moderation. When Magnum approached me I thought, ‘Why not?’, especially because there’s two different sides obviously to everyone, like the playful side and the more sophisticated side. So I felt like that was a really good alignment for me.

How do you indulge in both your playful and your sophisticated sides every day?

MK: Well, my playful side comes out a lot with my son, whether we’re drawing or painting or running around the house and also with my friends, when we’re dancing at home, putting the music on… I mean it’s fun to have that side but there’s also a serious, more sophisticated side when I’m working, when I go to a business meeting or even I feel sometimes it’s a little sophisticated if you have a Magnum ice cream in the bath with some champagne! [laughs]

Do you have a celebrity icon or somebody whose personality you emulate or look up to, someone who might be a bit playful and sophisticated?

MK: I would have to say Audrey Hepburn, she feels very elegant and sophisticated. And for the playful side – Marilyn Monroe. Yeah!

You’ve been to Cannes before. What do you really think of the glamorous festival – does it bring out your playful side or your sophisticated side?

What’s happening at the party later?

MK: This evening we’re kicking off the voting for whether people like the Magnum Black or the Magnum Pink and then they can vote on social media and it gives them the opportunity to turn some of the country’s landmarks into either pink or black.

If you had a monument or a landmark that you could turn pink or black in Europe – which one would it be?

MK: Probably the Eiffel Tower. That would be cool to see it turned pink! 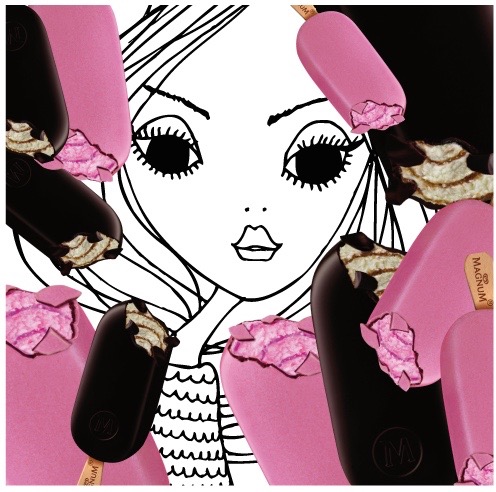