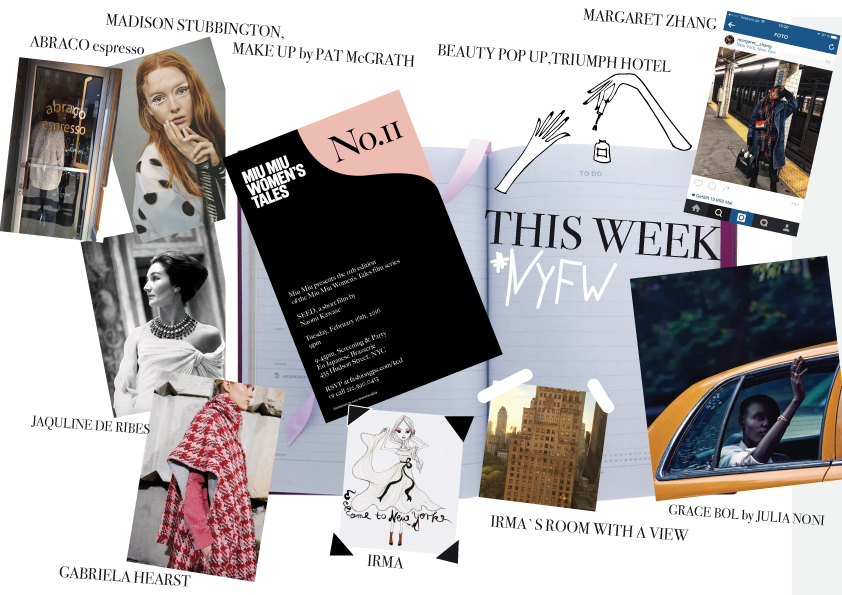 All eyes are on New York for New York Fashion Week. Here’s what you shouldn’t miss to make the most of #NYFW:

Tomorrow’s talent – 16 February
Discover up-and-coming designers at The Future of Fashion is Now runway show – and get a VIP ticket for front-row seating and access to the after-party.

A night at the museum – 15 February
One of the hot Fall 2016 shows of NYFW is Eckhaus Latta at the hip MoMA PS1 in Queens.

Glam look on the go – 15-18 February
For an instant (and free!) make-over, head over to one of the beauty pop-ups at Triumph Hotels across town for free make-up touch-ups and mini manicures.

Fashion exhibit – Through February 21
Last chance to see Jacqueline de Ribes: The Art of Style at the Met – a stunning exhibition about the French fashion muse with haute couture and ready-to-wear pieces

No tickets? No worries!
Watch a live-stream of runway shows at NYFW headquarters adjacent to Milk Studios. Not in New York? The best shows will also be live-streamed at nowfashion.com.

Know your Insta-games
Watch the Instagram feed of photographer, stylist, writer and fashion consultant on #margaretzhang, the former Sydney-based law student is the talk of the town not only during #NYFW.

Girls to watch
Grace Bol: Sudanese model Grace Bol brings her luminescent one-of-a-kind beauty to New York’s cold winter weather. Photographed by Julia Noni for T Magazine, Bol has an air of nonchalance as she traipses from one end of town to the other in between shows. Bol migrated to the US from her native Sudan at the age of 6 and was discovered in a shopping mall in Kansas four years ago.

Madison Stubbington: In the commercially-driven world of fashion, now is the moment of pure creative genius which makes this season and truly defines the style of the moment, inspiring everyone to push harder and do better, just think of Allessandro Michele for Gucci. Right now Madison Stubbington is central to many of these groundbreaking moments and everyone is asking for the girl with the fiery red hair and the pale, expressive face. She was discovered at 14 in a modelling competition in her home town of Adelaide.

Gabriela Hearst
Watch out for super luxurious and comfortable collection by Gabriela Hearst. A reversible down-lined blazer and epaulets on the shoulders of another jacket. Hearst makes polished, luxurious, expensive clothes, but they aren’t cold or minimalist. As it happens, she enlisted a collective from her native Uruguay, Manos del Uruguay, to weave the tweed of a wrap coat she designed. Very clever to play up her roots. Her ranch family heritage once again produced the collection’s most noteworthy, desirable pieces, among them almost impossibly soft, slouchy sweaters knit from warm yet light yak yarn, and puffer vests and jackets made from color-blocked waxed cotton or faded and distressed denim.

Morning coffee
Definitely a little eggie and the best espresso in town at Abraco (86 East 7th Street) the East Village. The little eggie sandwiches are tiny and enormously delicious, the esperesso is the strongerst in town.