The turban, named Dulband in Persian and brought to France where it was finally named turban, was always a headwear which originated from communities with prominent turban-wearing traditions in the Indian Subcontinent, Afghanistan, Southeast Asia, the Arabian Peninsula, and the Middle East.

In fashion, it rose to popularity in the 1910s as a symbol of eastern glamour, while in the 1940s it was worn by everyone from Hollywood stars to land girls and in the 70ies it was redesigned by designers including Biba in the UK and Halston in the US. The turban was a chic symbol of eastern inspired bohemian style.

Paul Poiret, the so-called ‘Sultan de la mode’, included the turban in his revival of ‘oriental’ styles in the early 1910s and the European aristrocacy started to collect original, vintage turbans from the middle east  and India which they decorated with brooches by van Cleef & Arpels and Cartier.

Soon millineries recognized the trend and almost every design house created their own signature turban. Just remember the Emilio Pucci turban which was worn by Farah Pahlavi in 1975. Elizabeth Taylor  and Joan Collins incorporated the turban in their daywear and avoided like this endless hours at the hairdresser for turban-style hair looks (remember the 60s ).

In the disco era of the 70s the turban was a perfect accessory in shiny satin or bright velvet on the dance floor of Studio 54, where Bianca Jagger revived the turban trend. Today you can find almost any kind of turban style. They cover the entire head or are worn like a hairband just around the head; they come with silk flowers by Gucci, white pearls on velvet or in vintage prints by Valentino.

Whichever one suits your style, they make a perfect cover up on a rainy day, keep you warm or just add a bit of bohemian chic into your classic look. 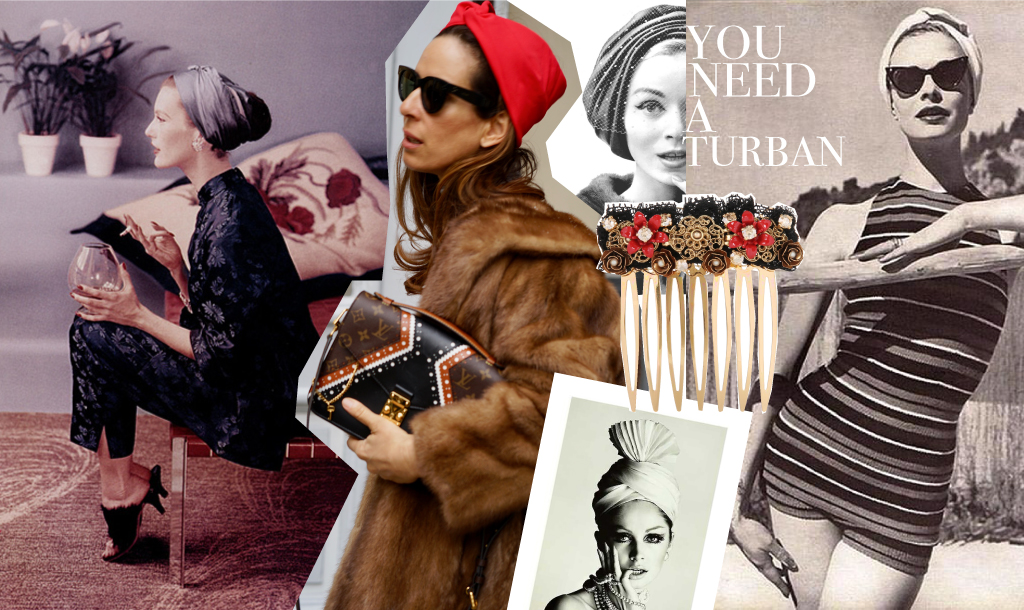