Before I met Matthew Rolston last week for dinner at SoHo House in Berlin, I was not aware to which level he had extended his spectrum of work. I first became familiar with his work in magazines like Rolling Stone Magazine, Interview, Vanity Fair, etc and I had always observed his visual language as he was also an Otis Parsons Alumni like me, just some years earlier, and when I started working as an Art Director I was strongly influenced by his artwork like so many others of my generation.

This month you will see a great selection of 20 years of photography in his Berlin exhibition „Hollywood Royale“ at Camera Work, which shows mostly works from the early 80s to the early 90s, an era when he had many assignments by the Hollywood elite like Madonna, Jack Nicholson, Sylvester Stallone, just to name a few.

He is a master of detail and has been involved in creating images almost all his life. After attending various California art schools, he now holds an Honorary Doctorate from Art Center College of Design in Pasadena, where he studied photography from 1976–78. His work is legendary and his way of storytelling with images makes him one of the greats in American photography.

I had the pleasure to visit him the next day at Camera Work Photogalerie in Berlin where the installation of his show was in full process. When he gave me a tour through his exhibition and told me the stories behind the images, I felt back in art school in Los Angeles where image making is a way of life and there is so much more to learn.

That is why I highly recommend to buy his latest book Hollywood Royale by teNeues Publishing, the book is not only an overall oeuvre of his work but his essays and even picture captions are full of information that will make you think and smile.

IRMA: What does it mean to you to exhibit your work at CameraWork in Berlin?

Matthew Rolston: I am honored to have my work shown at a gallery with the wonderful history of Camera Work. This is a gallery that has shown the works of the greatest editorial photographers of all time, such as Richard Avedon, Irving Penn, Herb Ritts, Patrick Demarchelier, Helmut Newton… I could go on and on. It is such a joy to see my works on the wall in this beautiful and historic space.

IRMA: Tell me about a set up of portrait shoot.

Matthew Rolston: It is always my goal to surprise my audience with an image that challenges their perception of a particular subject. I like to think of my photographs from the 1980s as attempting to be entertainment experiences all on their own. And I often leave small clues behind in my images that might amuse my audience with a sly touch of wit.

For this image of Madonna, it’s important to remember the context of the period. Madonna was widely known as the “Queen of Reinvention,” because for almost every new song, album cover, video, etc, she presented herself in a completely new or different way. Another element to remember is that the 1980s saw the beginnings of a shift in traditional gender presentation – particularly in the pop music world, and we are living with the results of that shift in the pop culture of today. The current trend of gender fluidity isn’t really new. This is when it began.

Therefore, I decided to dress Madonna as a man. And that of course led me to think of the ways in which Marlene Dietrich presented herself, particularly in the 1930 film Morocco directed by Berliner Josef von Sternberg at Paramount Studios in Hollywood. So I studied that film, and I discovered a scene in which Dietrich sits before a makeup mirror on which is inscribed (in lipstick), “I changed my mind Good luck.” This struck me as funny in context with Madonna and her many reinventions, so I decided to base the concept of my portrait on this moment in the film. By including that phrase on the mirror in my image, it was almost like she was saying to her audience, “Good luck trying to understand me. You thought you knew me? Not so much.”

A few more things to point out in this image. It’s not really backstage anywhere, it’s a SET of backstage that I had built in my studio. On the back of one of the scenery flats is a sign that says “No Smoking.” But of course, rule-breaker Madonna is flaunting a lit cigarette. One of Madonna’s biggest hits at that time was the song “Lucky Star,” and if you look very closely at the image, you can see clearly that the cigarette is labeled “Lucky Strike.” And of course, the use of the words “Good luck” in the mirror inscription also refers to Lucky Star.

Another interesting note, Madonna had never been dressed as a man to this point, nor made to look like Marlene Dietrich or referenced the post-Weimar style that von Sternberg and Dietrich brought to Hollywood in the 1930s. Clearly, this image had its own effect on Madonna personally, because four years later, she presented herself almost exactly in the style of my image for the video “Vogue,“ directed by David Fincher in 1990.

IRMA: You are very passionate about detail; can you tell me a story of one of your works where a tiny detail made the path for an entire story.

Matthew Rolston: Detail is very important to me. I’m not sure that I can name one specific time where a detail paved the way, but I firmly believe that even the smallest details carry enormous importance. The audience is always searching for meaning. It’s a natural instinct.

IRMA: Where do you find references and inspiration today, in a social media and digital driven world. Do you work with SM influences which added a new kind of language to photography?

But for me, inspiration can come from anywhere. My antenna is always up, and it’s always receiving. Of course, I’m looking at the history of photography, but also classical art, architecture and interior design, Hollywood films, all forms of music – really, inspiration can come from anything that gives me pleasure. Keying into those things that I love is how I continue to be inspired. And as far as I’m concerned, it’s the only way to live.

Digital advancements have made searching for inspiration much easier, but I still believe it is important to engage with printed materials and to physically visit museums, galleries, libraries, etc, to touch, feel, and experience things firsthand.

IRMA: In most of your fotos people do not smile but show an emotional strength, how do you get this strong expression out of them?

Matthew Rolston: In a way (and this has been said by many other portrait artists), every portrait is really a self-portrait. So perhaps I’m instinctively searching for my own identity in the faces and eyes of my subjects.

IRMA: Tell me about your Interpretation of the Seven Deadly Sins?

Matthew Rolston: The seven deadly sins, also known as the capital vices, or cardinal sins, are a grouping and classification, of Catholic origin, of vices, which exist as a form of moral instruction to the faithful. According to the standard list, they are: pride (vainglory), greed, lust, envy, gluttony, wrath (anger), and sloth.

The Catholic Church has used the doctrine of the seven deadly sins in order to curtail people’s inclinations towards ‘evil’ – before dire consequences or misdeeds might occur.

Pieter Bruegel the Elder’s depictions of the seven deadly sins, from the Dutch Renaissance, are one of the best known of many works, both religious and non-religious, that have represented this doctrine throughout the ages, and served as my inspiration for this 1985 photographic series, shot on assignment for Andy Warhol’s Interview magazine.

In this portfolio, American model and actress Kelly LeBrock, who, given her sensual beauty, could herself be considered a living example of lustful temptation, is shown as the literal embodiment of each of the sins, including being portrayed in the series as a version of legendary American entertainer Elvis Presley, in order to illustrate the sin of greed – in my interpretation – a greed for fame. 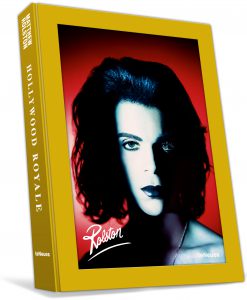 The exhibition of Hollywood Royale: Out of the School of Los Angeles made its worldwide debut at Berlin’s CAMERA WORK Photogalerie (Kantstraße 149, 10623 Berlin) on 21 October. It will be on display there until 2 December. The exhibit will make its U.S. debut in Los Angeles at the Fahey/Klein Gallery on Friday, 2 March.