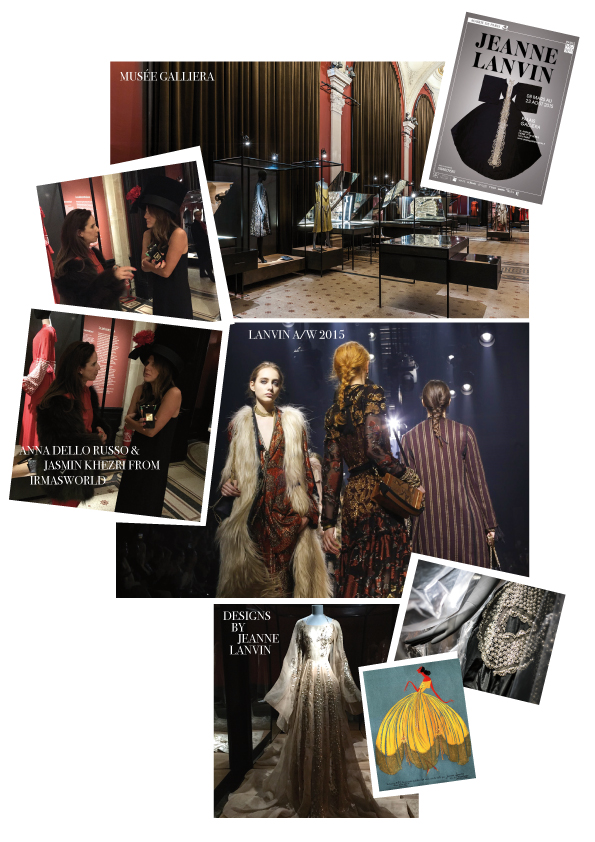 Paris: The new Lanvin exhibition at the Palais Galliera shows a stunning portrait of the designer Jeanne Lanvin, framing her creations of 100 examples in the context of her life (1867-1946).

Olivier Saillard, the museum’s general curator, worked closely with Alber Elbaz, Lanvin’s director par excellence since 2001, the man who made her name relevant to a whole new generation of women. Mr Alber Elbaz has been the creative director of Lanvin for fifteen years now. During all this time he was daring, experimenting and reimagining the idea of Ms. Jeanne Lanvin all the way.
Perhaps it was the brand’s looking at its heritage in preparation for the exhibition that got Elbaz reflecting on his own past. “I thought today maybe it was time to go back to my roots. To where I was born — Morocco,” revealed the designer after the show.

JK from IRMASWORLD met Anna Dello Russo during the opening night of the exhibition and who is a better testimonial to the question about the relationship between Jeanne Lanvin and Alber Elbaz than Anna Dello Russo, editor-at-large and creative consultant for Vogue Japan.

IRMA: How do you feel about what you see today behind the glass vitrines at the Musée Galliera and yesterday night at the Lanvin show in the Ecole de Beaux Arts?

ANNA DELLA RUSSO: It is amazing to see how with each collection Alber is taking the original a step further. He has a huge design repertoire that he can choose from every season in his own language, so I guess it will be a never-ending translation of the original design he got as a base from Jeanne Lanvin.

IRMA: What makes his collection so unique?

ADR: It is his personality which gives his clothes and accessories every time a certain allure. He designs in a very modern way and every time he takes it a bit further away but the strength is that inside his personality he has a certain softness which makes every collection sensational.

IRMA: When I see the designs by Jeanne Lanvin tonight, I think Alber understood so well every minuscule detail of what Lanvin is all about.

AdR: Definitely. And each time I see some of his inner warmth in it, that makes it lovable.

The exhibition will be at the Musée Galliera, 10 Avenue Pierre 1er de Serbie, Rue de Galliera, 75016 Paris, from the 8th of March till August 23rd.