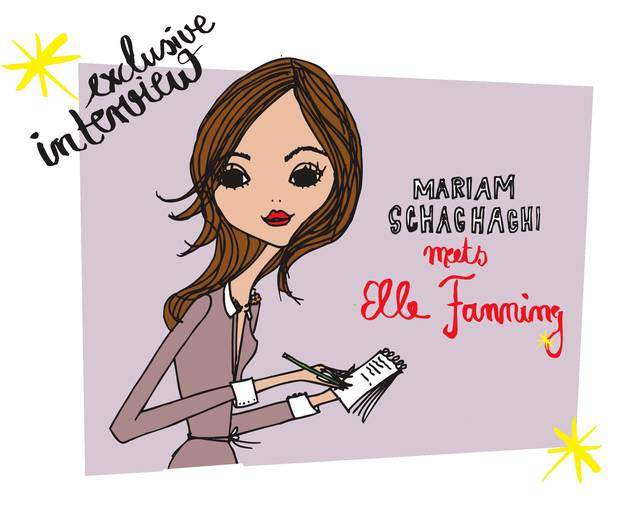 Film journalist Mariam loves to be invited into other people’s thoughts. Her devices: speaking six languages, a passion for culture and arts paired with a lot of empathy and interest. After having earned a double degree at the famous Sorbonne University, Mariam chose to write for magazines such as VOGUE, GLAMOUR and IN Style. Based in Hamburg, Germany, she has traveled along the international film festival circuit for years: Berlin, Cannes, Venice, Toronto – that’s her minimum. But she might add Zurich, London, Marrakech and Dubai or others. Meet our cosmopolitan cinéaste who will from time to time contribute to my page with her interviews – this time with an interview with actress Elle Fanning.

Elle was not even three years old when she started her career. She began acting playing the younger version of her sister Dakota’s characters in the mini-series “Taken” and the movie “I am Sam” with Michelle Pfeiffer. On April 9th, Elle celebrates her 15th birthday. She is mainly known for her starring roles in Sofia Coppola’s “Somewhere” and the box office success “We Bought a Zoo” with Scarlett Johansson.

In London, I met the blonde beauty in Soho to talk about her most recent movie, “Ginger and Rosa” (German movie release April 11th, 2013).

LONDON:
ELLE, YOUR NEW MOVIE “GINGER AND ROSA” IS ABOUT TWO TEENAGERS, WHERE THE ONE STARTS AN AFFAIR WITH THE OTHER’S FATHER. DO YOU HAVE A BEST FRIEND WHO SHARES THE UPS AND DOWN OF YOUR LIFE?
ELLE: I do have a best friend and I’ve known her since I was 9 when I ent to a regular school. I met her there. She’s definitely my best friend. It was good to have that so I could draw from the experience of having someone for this movie! Ginger is at that age where you’re looking for someone to trust outside of your family. Not your parents – you need someone else. I think there’s a way that you talk to best friends that there is like a secret code, you can read each other’s minds. Ginger and Rosa were eveb born on the same day – you can’t really get any closer. That’s what makes the betrayal that much harder.

HOW MUCH TIME DO YOU SPEND WITH YOUR BEST FRIEND AS YOU WORK A LOT?
ELLE: When I do a film it’s probably just a couple of months. So the rest of the year I’m at home really. But we call each other on the phone and text and all that, so we still do keep in touch.

DOES THE MOVIE GIVE A REAL PORTRAIT OF GIRLS YOUR AGE, THINKING ABOUT IDEOLOGIES AND RELIGION? DO THESE TOPICS OCCUPY YOUR MIND?
ELLE: Yeah, I think it’s the time where you want to be an adult but you don’t want all the responsibilities of being an adult. You still want to be a kid, you still want to be free and childlike. So it’s sort of like you’re trying to find your place in the world, you’re trying to find what’s my view on that subject. Ginger and Rosa are questioning death – especially death – because they grow up in the Sixties at the time of the Cuban missile crisis. Through that menace, they could all die tomorrow at just the press of a button. I tried to put myself in that position of thinking that way – and it was really frightening to me!

CAN YOU RELATE IN GENERAL TO HAVING A CRUSH ON AN OLDER GUY – LET’S NOT SAY MEN!
ELLE: (laughs) Well I think it’s a girl’s like fantasy. Like, I have a crush on Ryan Gosling.

DOESN’T EVERYBODY?!
ELLE: Everyone has, okay, so you know what I mean? Girls have posters of older guys on their walls so it’s kind of that idea. But for Rosa it’s that time, especially during the 50s and 60s, where women shift from being housewives to being liberated. That structured way of life changed completely. It’s more just free. From that you see how it’s possible for someone to have a relationship with someone older.

YOU STARTED SO EARLY – DO YOU STILL GET CRUSHES ON ACTORS – EXCEPT RYAN GOSLING…?
ELLE: Yeah, I still get so starstruck with people, you hear names like Angelina Jolie and it’s like ‘Oh my gosh!’ You don’t see them as real at first. Then I did a movie with her. When I was meeting her for the first time she gave me a huge hug and was like, ‘We’re gonna have so much fun working together’ and I was like right, I’m looking at her – this is her! It’s like an out of body experience in a way – but then you come to realise that they’re just people.