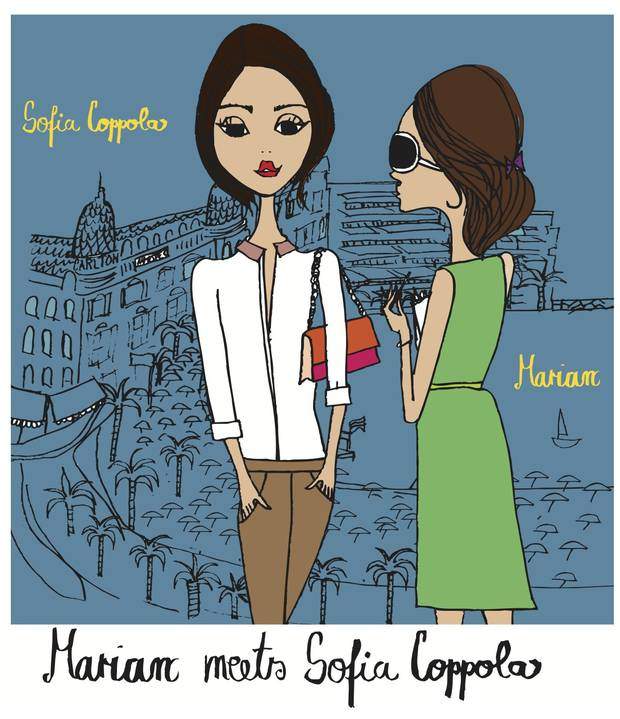 CANNES: Today our guest Editor Mariam Schaghaghi meets one of my favorite film directors, screen writers and producers, Sofia Coppola, at the 66th Cannes Film Festival. I love all her films because they always have the most beautiful pictures.

CANNES: We’re sitting in the “Movie Stars Lounge” in the Carlton Hotel. The weather outside on the Croisette is bad, it is raining cats and dogs, the palm trees are shaken by the wind – not glamourous at all! But all the people on the Riviera swear that the weather is always bad during the Film Festival. However, I had sunnier days than this in Cannes!

Sofia’s outfit is also much more pragmatic than elegant: she wears dark trousers and a white and blue, simple linen shirt with it. Basta. No high heels, no fanciness whatsoever.

All the extravagancies Sofia Coppola has left for her four actors of “The Bling Ring”. Middle-class girls from the Valley who are fascinated with the lifestyle of Hollywood stars – and who break into the celebrities’ villas to steal luxury handbags, jewellery, clothes. The “Bling Ring” gang really existed – Sofia had read about the college students in a Vanity Fair article, “The Suspects wore Louboutins”.

Sofia, yesterday a real heist took place in Cannes: Chopard jewellery worth around 1 million dollars was robbed from a hotel. Was this some PR for your movie?
Yeah, it really sounds like that, doesn’t it? A publicity heist for our movie!

What fascinated you most when you read the Vanity Fair article?
It felt immediately like an interesting movie: a group of kids out of control. The story reveals a lot about contemporary lifestyle, and it could not have taken place ten years ago. It is so different to be a teenager nowadays. It’s hard to figure out your identity with that much information you get from the internet. It’s pop culture overload.

You had a privileged upbringing yourself. You were surrounded by affluence and were used to Hollywood luxury. How did you experience popularity? What made you not become like those kids yearning for more and more status symbols?
It was a different time. We didn’t have reality TV. There was not this emphasis on status and brands. Reality TV brought that concept up, that anybody can be famous.

Did you have some heist movies in mind when you prepared this one?
No, but I let the kids watch some classic heist movies like “The Thomas Crown Affair”, “Ocean’s Eleven”or “Bonnie and Clyde”. They should get a romantic and fun approach to heists. But I didn’t want my movie to look fun and romantic!

Is your movie also a portrait of Los Angeles society?
Those kids are obsessed with the culture based on appearances, status and fame. That was their focus. I think it’s valuable for American society, not only for L.A. The influence of tabloid stars and reality TV is all over America.

You are a mother of two girls. If “Bling Culture” is something of a zeitgeist phenomenon, how do you want to protect your children from it?
I try to keep my daughters as innocent as much as I can. I control what they are exposed to. I try to be aware of what they are watching. For the Bling kids, the parents were not very involved in their education. They were hardly present.

You shot in Paris Hilton’s house. How did that work out?
Well, she was one of  the victims and offered to show us around in her house. The nightclub in her house that we are showing is real! It was interesting to see that Paris World. She likes it that way, it’s fun for her.

You are also a spokesperson for Louis Vuitton. What amount of luxury do you find justifiable and not gross?
That’s up to any person, I appreciate the side of luxury brands that make beautiful quality. I like a lot of things in moderation. In this story, it’s more the flashy side that I don’t respond to as much. But I’m no purist.