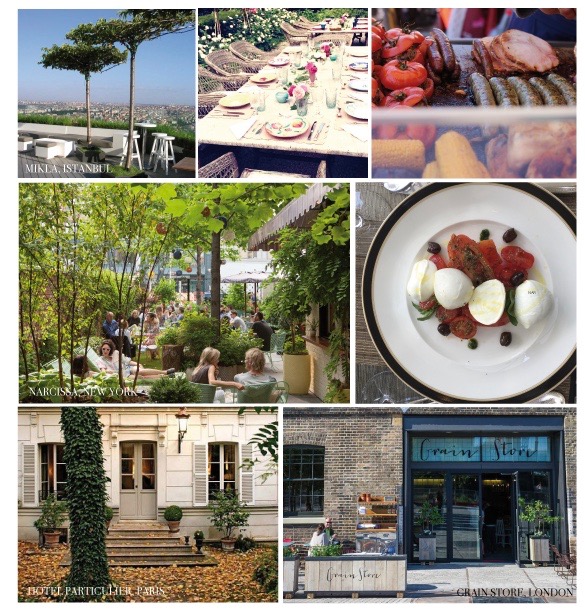 LONDON: For Londoners alfresco dining is not a question of summer but rather whether it is raining or not. If it isn’t, you sit outside, sometimes even for dinner, maybe at a gastro pub under a heating mantle or covered in your pashmina. We decided that autumn should not keep us inside. Wherever you are, there might be a sunny day in autumn where you will find a place in the sun still keeping you warm. Or just take your pre-dinner drink in fresh air and enjoy even more the cosiness and warmth of an inside place afterwards. Here are IRMA’s four favorite places to still sit outside.

Grain Store, London
A relative newcomer to the London dining scene, Grain Store has not only been spearheading the King’s Cross regeneration efforts, it’s also one of the best alfresco restaurants in the city. With its relaxed atmosphere and the sprawling sunny terrace overlooking Granary Square filled with a hodgepodge of brightly coloured tables and chairs, it is an invitation to linger and people watch while enjoying veggie-centric cuisine.
Granary Square, 1-3 Stable Street, London N1C 4AB

Narcissa, New York
This fabulous restaurant at the Standard Hotel East Village became even more attractive when it added a lovely outdoor terrace last year. Unexpectedly quiet and green, and lit by colourful lanterns once the sun sets, it’s an incredibly romantic spot. The menu is perfect and changes according to the season, California cuisine made from organic, farm-fresh produce that comes from André Balazs’ Hudson Valley farm, Locusts on Hudson.
25 Cooper Square (5th St. and Bowery), New York

Restaurant at L’Hotel Particulier, Paris
Paris’ best-kept secret is this lush garden in the heart of the Montmartre hillside. A handful of little wrought-iron tables are nestled among the flowers and underneath big old trees that provide shade on hot days. The menu brims with French classics, but in a charming setting like this, you’d be happy with some wine and cheese. Probably the best time to enjoy this quiet oasis is for brunch on the weekend.
23 avenue Junot, Pavillon D, 75018 Paris

Mikla, Istanbul
There is always a breeze on the penthouse terrace of this stylish restaurant set atop the Marmara Pera Hotel. It’s hard to decide what’s better – the views of the city, the Golden Horn and the Bosphorus or the ambitious cuisine (Mediterranean and Turkish dishes with a Scandinavian twist). When the DJ turns the rooftop pool area by the bar into a party zone, there’s no place I’d rather be.
Meşrutiyet Caddesi 167/185, Beyoğlu, Istanbul