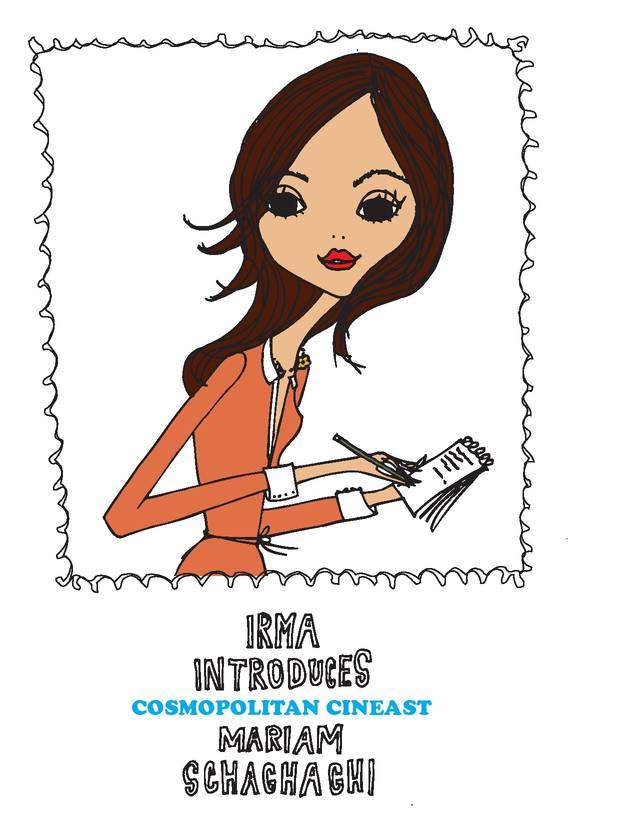 LONDON: Today I would like to introduce to you my childhood friend and now internationally acclaimed film critic, author and editor Ms. Mariam Schaghaghi. She has met practically every actor you might think of. George Clooney? She knows him since “Batman Returns”. Brad Pitt? Since “Seven Years in Tibet”, which has been quite a while….

Film journalist Mariam loves to be invited into other people’s thoughts. Her devices: speaking six languages, a passion for culture and arts paired with a lot of empathy and interest. After having earned a double degree at the famous Sorbonne University, Mariam chose to write for magazines such as VOGUE, GLAMOUR and IN Style. Based in Hamburg, Germany, she has traveled along the international film festival circuit for years: Berlin, Cannes, Venice, Toronto – that’s her minimum. But she might add Zurich, London, Marrakech and Dubai or others. Meet our cosmopolitan cineaste who will from time to time contribute to my page with her interviews.

Beware of her sweet looks: Blonde hair, beautiful face, smooth sea-blue eyes, dimples in her cheeks that seem to embrace her beautiful smile. But once she stands in front of her camera, her acting force is striking. Her intensity is almost too painful to watch – like a force of nature. Now she shows this intensity in the real-life drama “The Impossible” that comes to our cinemas these days. She portrays a mother who fights for survival after the Tsunami hit her family during their Thailand vacation… and got her second Oscar nomination for it! So let’s cross the fingers for Naomi: On the 24th of February, she might finally take home a golden statue.

NAOMI, DID YOU EXPLORE IN THIS FILM BEING A PARENT?
NAOMI: I’ve played mothers lots of times, even before I was a mother myself. But yeah, I mean I worry about my children every single day in the tiniest of ways, or the worst possible ideas come into my head. I just worry, worry, worry all the time about their safety. I think definitely, having been a mother and playing this character added a weight to it.

YOU HAVE TWO SONS. ARE YOU A PROTECTIVE MOTHER?
NAOMI: Yes, I am. But I don’t think I’m neurotically cautious, I’m just very cautious. Yet, I want them to feel brave and want to trust them but I do find myself going, ‘Oh, just be quiet, let them explore it a bit more’. Trial and error, you know.

WAS IT DIFFICULT TO ACT SUBMERGED IN THE WATER?
NAOMI: Yes! I swallowed a lot of water! This was much more difficult than I ever imagined – also the underwater stuff, where I was sort of anchored to a chair that was spinning and things being thrown at you and you’re running out of breath… The panic that you get into when you’re underwater, it just makes you crazy. It really did make me crazy.

DID YOU REGRET IT AT THAT MOMENT TO HAVE SAID YES TO THAT MOVIE?
NAOMI: No. Because I got tiny glimpses into what these people really went through when the giant wave hit them in 2004.

DO YOUR KIDS KNOW HOW TO SWIM?
NAOMI: The eldest, Alex, does know, Kai who is four, is almost there. We don’t live in New York only, but we also have a house on the beach in Australia where we spend a lot of time. That’s why it’s so absolutely important to me that the kids know to swim.