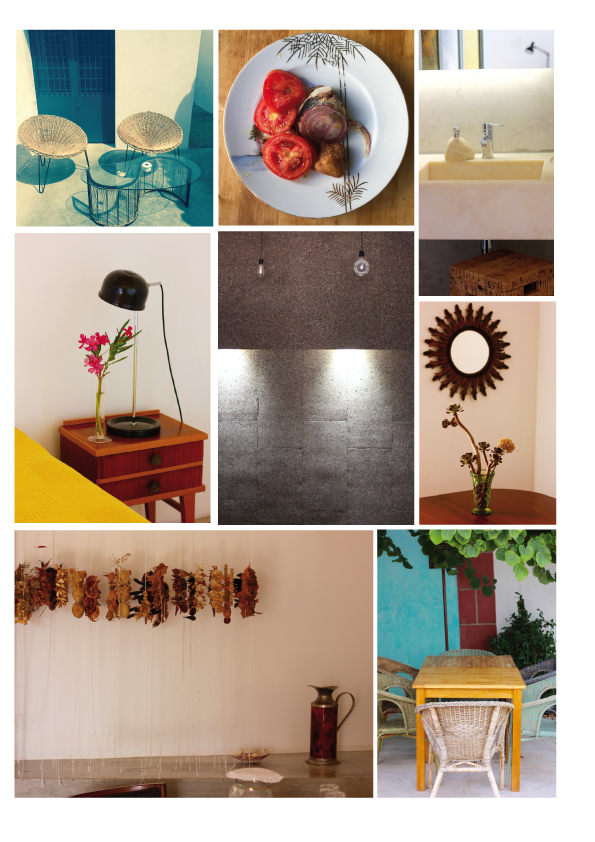 Castro Marim, Portugal: While traveling around Portugal I met Eglantina Monteiro, the owner of a very special little hotel named Companhia das Culturas in Castro Marim. Tina is an anthropologist and an art curator. Her vision about living and building the life that surrounds her gave me lots of new ideas when we had a talk.

IRMA: What was the initial idea to start a hotel business as you are coming from an artistic side?

Eglantina Monteiro: The starting point is a heritage: a farm 40ha now, that has belonged to my husband’s family for 7 generations. It was always an important agricultural estate. Twice a year there was a fair for exchanging products and animals such as horses, cows, sheep or goats.

Since the middle of the last century, all the buildings connected to agriculture activity became ruins. Companhia das Culturas is a work about and around ruins, not a lifting. During the entire process of recuperation, we recognized different construction techniques, corresponding to different periods, needs and objectives.

This last intervention is part of this process, which unveils the different layers of time and space.

My husband is a writer; my background is philosophy and anthropology. My main issue has to do with thought and awareness that arts and material culture inform, but above all shape. It is about the phenomenology of this space, the territory, the eco system in the sense that it challenges and creates a consciousness that differs from one place to another (desert, forest, Mediterranean, continental, glacial…).

IRMA: Your vision and idea of putting objects together is something I thought was extremely interesting and added a personal signature to CC. What is your idea behind creating an interesting space?

E.M.: Houses are like people: some have a stronger personality than others. With such a rich past, it would be very difficult to make this place similar to other ones that have no past or testimony. My husband and I spent a lot of time contemplating the place. Feeling the wind, the scents, the cycle of the seasons… Listening to people, knowing the history of a place inhabited for thousands of years!

Our perception about this place, is inscribed in the recovered materials, in the ancient walls that coexist with the new ones, the same with the objects. I think all of this meets a contemporary sense of hospitality.

E.M.: My favorite dishes are tuna special loin with beans, carrots and capers and caroub risotto with shiitake mushrooms. But one particular aspect of our restaurant is the Portuguese menu, a concept that Francisco, my husband, developed with Pedro, based in the 3 ecosystems that form the Portuguese territory: Mediterranean, Atlantic and Continental, naturally connected with many different cultures that molded the landscape [agriculture and fisheries] and a gastronomy. The landscape on the dish is one of our restaurant statements.

IRMA: You are also an artist, where do you find inspiration?

A.M.: I’m not really an artist, I’m an anthropologist of art and an art curator. My inspiration is the contemporary world – distinct historical times and cultural heritage living simultaneously, often in conflict. The monopoly of large corporations on local producers is part of this conflict (the abandon of the fields in different parts of the world and the massive migration from Africa to Europe are also a manifestation of this).  The celebration of the producers that keep the diversity of landscapes and biodiversity is the matrix of Companhia das Culturas, present in the architecture, the interiors and the meals we serve daily. Two installations I made: the carob cloak in the lounge and other one with dried products suspended in the dining room point out that.

I do not separate aesthetics of ethics. In my recovery work of furniture, I’m interested in the craftsmen work as well as in the contemporary use of traditional products and techniques. CC is completely committed with the local knowledge and local economy.

IRMA: Which book are you reading at the moment?

A.M.: Generally I read two or three books at the same time. Now I’m finishing Blue Dahlia, Black Gold. A journey into Angola by Daniel Metcalfe. The author fell in love of the Portuguese language listening the fado singer Ana Moura and decided to work on the Portuguese colonization. He travelled to São Tome, then to Angola. The contemporary civil war that lasted for 30th is grounded in the colonial frontiers and on the petrol and diamonds control. Neither ideological, neither academic, it’s a very good travel literature book.

The other one is a classic author, Elias Canetti, Die Blendung, in a Portuguese version.

IRMA: How do you communicate about your place, and which guests are you looking for?

A.M.: We are in different online platforms and we appeared in a quite a few significant magazines (both national and international). We are currently increasing the social network communication.

IRMA: What are your future plans for the hotel?

A strategy to decrease the low season is to be open from mid-March to mid-November with enough public to keep and form a qualified team.

IRMA: Three things you like to do most in the region?

A.M.: The mild weather all through the all year, to be just 1.5km from the beach, the Guadiana River and the S Living in the frontier is also a must. The access to a high quality products – fresh fish, shepherding meat, natural cereals, a wide variety of vegetables instead of the greenhouse salads that spoil the landscape, aromatic herbs that make tasty and light dishes.

A population that has always learned to live with different cultures coming from the Mediterranean and the North Atlantic, or that has to leave to work in different countries – Morocco, France, Germany, Brazil, Argentina, Angola.

Our world is of intense and hard migrations, this region has that imprint.

IRMA: Do you have a special beauty routine in the morning? And what is special about all the beauty products Alexandra is using for the treatment in the hamam?

A.M.: Eat and sleep well, do yoga twice a week.

The beauty products at the hamam are all organic and local or Portuguese ones: organic olive oil, Almond oil and essential oils and perfumes from Herdade do Covo in the Sierra of Mertola